Tomorrow morning, around 6:30 am, I’ll start my next cycle tour, shown below.

This tour is a different than past tours in a few ways. First, I won’t be using “that bike,” which is the folding touring bike I used in the UK and EU. This time, I’m cycling on a full size touring bike, which is made in Minnesota.

Second, this tour is different because it’s my first American cycle tour. I’ll miss hearing different languages, but I’m looking forward to the landscape, especially during this time of year when the leaves are changing color. I’ll also be going by some wonderful rivers and lakes, including Lake Superior. That lake always makes me pause and relax.

The third way this tour is different is that I’m not as fit as I was in the past. That doesn’t bother me much. I never get too worried about going very fast or far. Slow and steady works well enough. A fourth difference with this tour is a bit dramatic. It’s the first tour I’ll cycle as a cancer survivor. Nine weeks ago, I had surgery to get rid of prostate cancer, and it worked. I’m comfortable talking about it, but at the moment, I’m looking forward to the life of a cycle tour. After dealing with cancer, being on a loaded bike for a few days feels right in ways that are hard to describe, especially when I can spent some time at Lake Superior. But, I will say that any guy around 50 must get tested, each year–no excuses. Catching it early means living, not doing the former means not doing the later.

On to more pleasant topics, the picture below isn’t actually part of my trip, to Duluth or maybe Gooseberry Falls. I took it on my practice ride tonight. I’ve never rode this bike fully loaded before, so I wanted to see how it felt, by peddling to the capital of our great state. It felt great. 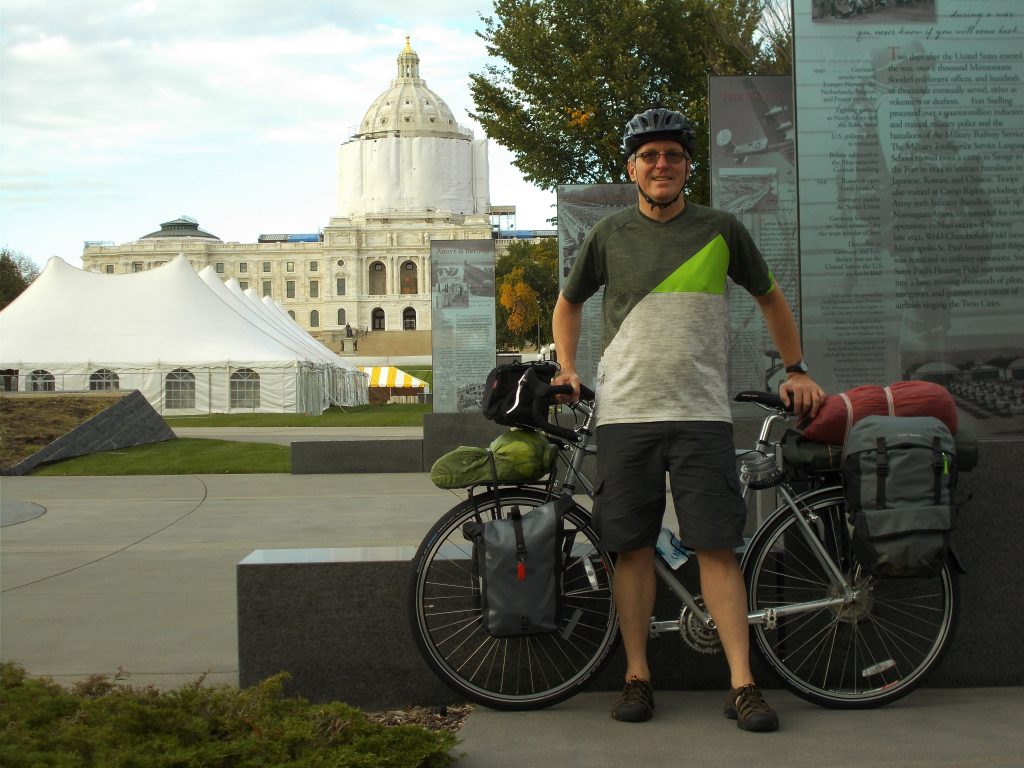 The route below shows some of the best sights in St. Paul. One is Grand Olde Creamery, which has great ice cream. Another is the St. Paul Farmer’s Market, if you cycle the route on a weekend morning. If you want to see pictures from the route, click the square icon in the upper-left corner of the map. It might also help to view the map full screen, by clicking the square icon in the upper-right corneer.

Some other highlights for this route are below.

The route is 17.5 miles, and most of it is on dedicated bike trails. The biggest except in cycling through downtown St. Paul. In that case, the route uses slow side roads, instead of busier streets. I usually take this route on the weekend, to finish at the St. Paul Farmer’s Market. That makes it even easier to cycle on the roads in downtown St. Paul.

I’ve cycled the route fast, in about an hour and a half, but going fast doesn’t feel right because you fly by many great sights. I recommend packing a lunch, stopping at a hidden picnic table in the woods, stopping again at the St. Paul Farmer’s Market (on weekends only), and of course, stopping at the Grand Olde Creamery. Of course, all these stops slow things down, but sometimes, the appreciating sights is better than speed.

See me on Google Maps! https://maps.app.goo.gl/yzVwEsa6J0tZE3rV2